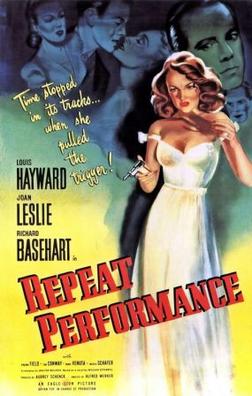 Finally got to see 1947’s “Repeat Performance” this week after several decades. Ten years ago (ten!) I wrote about my frustration in even figuring out the name of this old piece of noir. I last saw it when it featured on some cable channel somewhere in the mid-1980s, and while I often don’t remember a lot of plot points of films, some particular features of this one always stuck with me. In particular, I’d been interested in seeing it again because it was a New Year’s Eve movie, and there just aren’t a lot of films that take that as a topic (other than “The Apartment”). Figuring out its name didn’t turn out to be a total help at the time, because it wasn’t available anymore on VHS, wasn’t available yet on DVD, and streaming wasn’t a thing. Periodic searches through the years turned up nothing except the occasional bootleg that appeared to have actually been shot off a television screen. Still, it was eligible to be added to my Amazon Prime list even though it didn’t really exist — and then, suddenly, it did! So we had to watch it before it disappeared from our life again.

It stars Joan Leslie as a young stage actress who became a star in a vehicle written by the man who would become her husband, played by Louis Hayward. The movie begins with her shooting her wayward husband, who has been having an affair with the woman who wrote Leslie’s current starring vehicle. Fleeing the scene she finds her friend, a charming young poet played by Richard Basehart, in a role that otherwise would have belonged to David Wayne. As they try to get to someone they think will know what to do, she wishes she had the whole year to do over again. With no explanation, she gets her wish.

I was a little disappointed that one of my key memory points about the film, a fact that I had carried ever since I saw it in the mid-’80s, was, in fact, wrong. I recalled that the poet Basehart played was offered a bound volume of his poetry, with morocco endpapers. Always thought he was specific about the endpapers. Turns out, he was offered a volume on vellum, morocco-bound. The morocco was on the binding, not the endpapers. Most likely my brain confused morocco with marbled end papers. Why this change in detail disappoints me, it’s hard to say. Perhaps it was the idea that someone cared about how his endpapers looked.

It is a perfectly fine film for its time — not the best of its kind, but far from the worst. Plenty of scenery is chewed, but we expect that from this kind of affair. If you’re a fan of love triangle murder almost-mysteries, build-ups to inevitable fate, or what may be the thinnest mustache ever filmed (on Tom Conway), you’re probably into this. Also, to show the passing of time they used a theater marquis instead of falling pages from a calendar, an invention I appreciated.

Was this as good as most things you wait 30 years for? Yes, pretty much: exactly what I thought it would be, no better nor worse an experience than any other. When they designed the new Palace Theater marquee, they didn’t fool around. In fact, they went back to the source, the old Palace Theater marquee. It was run by various companies through the years, including Radio Keith Orpheum (RKO) and Fabian, but the marquee remained the same for a long time.

That 1951 picture accompanied a Life Magazine article on how the movie industry was battling “T-V” by showing things such as live boxing matches. The cutline was “Crowds gather early for telecast at Fabian Palace Theater in Albany, N.Y., which seated 3,000 and turned away 3,000.” The battle between media was intense in those early days, as movies saw a precipitous drop in attendance as television spread throughout the land. “Last week NBC was at work on a plan to make its own movies from television shows and to release them in movie houses.” God help us, nothing has changed. But in the case of the marquee, that’s a good thing. (Because when it was changed, it looked like this.) Can’t believe it’s this soon, but in just a few weeks, Mark Wood, the original lead violinist of the fabled Trans-Siberian Orchestra, will be leading the students of the Columbia High School strings program in a two-day workshop, “Electrify Your Strings.” The students of this already excellent program will be electrifying, pumping up the sound, getting up out of their seats (except the cellists, and maybe even them), and having a good time. At the end of the workshop, Mark Wood and the students will give a concert that is open to the public and highly anticipated. If you’re in the Albany area and at all into strings, you really won’t want to miss this unique opportunity to see one of the leading crossover artists of the day, working with the crossover artists of the future.

Want to see and hear the orchestra in previous performance and rehearsal? Go here.

As I was preparing the new section of my website, Torn From Yesterday’s Headlines!, I was organizing a set of newspaper clippings I had found in the course of doing genealogical research that had no relation to my family history but that were too interesting to ignore. And among those clippings (virtual clippings, mind you, found through online services) was this magnificent article from 1925, “Albany Girl Weds Prince of Spain.” Now, you would think that would merit more than an inch and a half of attention, but perhaps it was a busy news day. In any event, the whole story goes like this:

Rome. March 31 – (AP) – Miss Katherine Sage, daughter of former State Senator Henry M. Sage of Albany, N.Y., was married today to Don Ranieri Bourbon del Monte, prince of San Fuastino [sic]. The ceremony was performed by Cardinal Lega in the Church of San Tandrea, next to the Quirinal palace. Ambassador Fletcher gave the bride away. The new American princess has been an art student in Rome for the past two years.

Never mind the paper’s misspelling of San Faustino, the point here is that you would think that if an Albany native had become some kind of princess, that someone would know about it around here. Well, it turns out that Katherine Sage was, in fact, pretty well known.

END_OF_DOCUMENT_TOKEN_TO_BE_REPLACED

Having volunteered to put together a slideshow for an upcoming fundraising event for the high school orchestra, I’m just learning how stupidly complicated a seemingly simple task can be made. I just wanted to turn still photos into a slideshow. iMovie does this in seconds, but degrades image quality on the stills to the point they look like early Soviet-bloc animation. Flash will do this but I’ve got to do nearly everything by hand, I may or may not end up with a universally compatible file, and if I want it in the somewhat-universal .flv format, weirdly, Flash won’t do that. I’ve got to go to another program, Flash Video Encoder. (Adobe, there is no limit to the ways in which you suck. Truly.) Powerpoint will make a decent slideshow, but music is tricky and I’m unsure about whether the document will run as a standalone.

Steeped in frustration, I found out that lowly old Graphic Converter, for which I’ve had no use since I moved to Adobe Creative Suite, does for the price of my ancient license what my $700 Adobe program can’t do, and does it quickly — makes a quick, perfect, standalone Quicktime slideshow with embedded music. Absolutely perfect.

Except that when I wanted to share it here, despite assurances from Youtube that it supported Quicktime .mov files, I was told the file format was incompatible. So back to another format. So back to Flash, to figuring out how to make an .flv file when .swf seems to be the only option (other than the already scorned .mov). Blah, blah, blah. With anger and agitation and the standard array of tinker’s cusses, I finally put together the most primitive slideshow of still images imaginable. Perfectly serviceable, and it only took three days out of my life. My lovely wife, with a magnificent painting done by Spring Hofeldt, the featured artist at the Arts Center. She did a series of portraits of bald people, and has a few other great paintings up, too. I hadn’t seen her work before; she’s a seriously talented painter. Head up to Troy and check her out.

Other photos from the great Troy Night Out to come, look for them here.